Back to all posts

Press Release for New CD, What I Did

Americana band “Hey Mavis” has teamed-up with Adam Aijala (guitarist of Yonder Mountain String Band), Chuck Auerbach (co-writer of the Black Keys song Hard Row), and Don Dixon (REM, Smithereens, Mary Chapin Carpenter, Red Clay Ramblers), to create a musical feast that contains a pinch of jazz, bluegrass, old-timey, and folk, and a heaping spoonful of rock. The CD, slated for March 2015 release, is sure to please the band’s current fan base, while also enticing new followers (with lyrics, instrumentation and arrangements resonating with both young and old folks alike, it’s common to see a college kid standing next to an eighty-year-old at a Hey Mavis show). According to Auerbach, who co-wrote a song on the CD and is coaching the group from the sidelines, “You can’t really define what category or genre Hey Mavis belongs to, but the vocals are beautiful, the songs are wonderful, and they’re great musicians. Only a fool wouldn't love this band.”

What I Did is Adam Aijala’s first endeavor in the role of producer. Like Auerbach, Aijala felt a heavy attraction to the songwriting and the melodies conjured-up by Laurie Michelle Caner. “Hey Mavis has the qualities I love in a great band; originality, solid musicianship, amazing vocals and an openness to experimentation. Their sound has an overall folky feel, but a touch of rock n' roll as well. If you haven't heard them I encourage you to check them out..”

The CD was recorded and mixed by Don Dixon, who still uses old-school technology and some of the same vintage gear that he used for recording the first three REM albums.  After working with Hey Mavis on three albums, Don probably describes the band the best:

“Wrapped in original songs whose styles range from old timey to jazzy to blistering alt rock, Laurie's voice turns from cold steel to melted butter in the time it takes your heart to break."  - Don Dixon 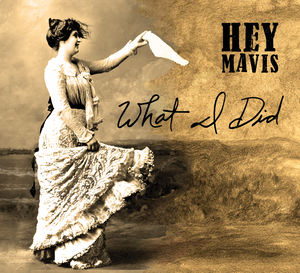